St. Elizabeth, the cousin of the Blessed Virgin Mary, in her joyful greeting, called Mary the mother of my Lord [Luke 1:43] and St. Gregory Nazianzus called Mary “the Mother of the King of the universe,” and the “Virgin Mother who brought forth the King of the whole world” [Ven. Pius XII, Ad Caeli Reginum #11]  Ven. Pius XII sums up the corpus of theological writings and traditions when he states, The theologians of the Church, deriving their teaching from these and almost innumerable other testimonies handed down long ago, have called the most Blessed Virgin the Queen of all creatures, the Queen of the world, and the Ruler of all [Ven. Pius XII, Ad Caeli Reginum #22].

Coronation of Mary, by Velazquez

Now here’s my experience.  I was out on a Rosary walk on Sunday, and while praying the Glorious Mysteries, and upon meditating on the 5th mystery, Coronation of Mary, I realized something immediately, and I chuckled because of all of the heartache surrounding cosmology in the Church during the 16th and 17th centuries:  Mary really is and has been the Queen of the Universe for nearly 2000 years now!  Because Mary is Queen of the Universe, then the Earth from which she and our Lord King of the Universe first appeared, must actually be at the center of the Universe, and all of the controversy surrounding Copernicus and Galileo must be just an unfortunate mishap!

Recall that Aristotle (384-322 BC) and Ptolemy (100-170 AD)  had their theory that the Earth is at the center of the Universe; this position was well-validated by the Book of Joshua which implied that Sun and Moon move in the sky around the Earth according to how God commanded:

‘Sun, stand thou still at Gibeon, and thou Moon in the valley of Ai′jalon.’ And the sun stood still, and the moon stayed, until the nation took vengeance on their enemies. [Joshua 10:12-13, RSVCE]

Aristotelian-Ptolemaic Theory of the Universe (Earth is center, circa 150 AD)

Copernicus then published his helio-centric theory in 1543 which placed the Sun, not the Earth, at the center of the Universe. 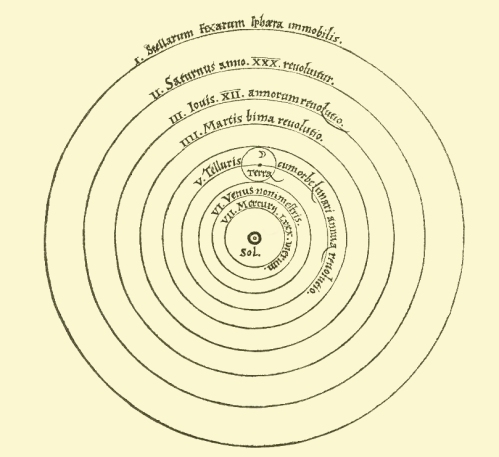 Copernican Heliocentric Theory of the Universe [Sun is center; circa 1543 AD]

Galileo then picked up that theory, and began to teach and write about it in the early 17th Century.  In 1633, Galileo was brought before the Roman Inquisition to answer for his conduct and writings, having inadvertently embarrassed Pope Urban VIII, and being severely reprimanded and censured as a result.

Galileo at Roman Inquisition, circa 1633

Note, however, that Galileo, who embraced the Copernican helio-centric theory, was never officially branded as a heretic by the Church.  Essentially, there was just a nasty misunderstanding.

Where the Center of the Universe is Presently Present to Us