Today, during the Holy Sacrifice of the Mass, I distinctly heard during my personal, mental prayer while the liturgy was unfolding, that “Heaven is here.”  I could also sense others, in my mind’s eye, who were there praying and adoring, but not physically there – that is, there only as spiritually sensed. 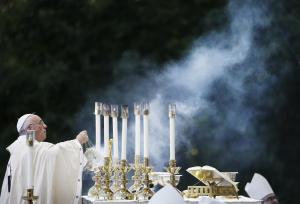 I thank God, and whoever He sends – perhaps my guardian angel – for revelations like these which remind me of the reality which is there and here, even though veiled.

One day, many shall be transformed and awake anew in that state of heavenly reality which will show us that we are not in a “place” as much as we are in a “state of being.”

For, as St. Paul and St. John promised:

Beloved, we are God’s children now; what we will be has not yet been revealed. What we do know is this: when he is revealed, we will be like him, for we will see him as he is.  [1 John 3:2]

Is Little Samantha an Angel?

Yesterday, in the early morning before getting up for work, I had a waking dream – a vision of sorts.  It was very simple.  It was as if someone had immediately and abruptly planted an image directly into my mind of a little girl – probably no older than kindergarten age.  I had no thoughts in my mind before that – it was like, “Woah!  Oh, hello!”  She was grinning at me with her dark blue-green eyes.  She had a fair complexion with blonde hair, was wearing a simple dress of multiple, conservative colors, and she had a slender gold band around her forehead.  She said nothing, but only sat and gazed at me.  The vision was brief – maybe 5 seconds.

I asked myself, “Who was that little girl?  Why did I see her all of a sudden and now?”

My first thought for a name was “Amanda.”  But, then I thought, “Well, isn’t that the name of the song from the group, Boston that I listened to the other day?” and I left it at that.  Later in the day, after noon-time Mass, I knew that her name must have been “Samantha.”  But who is she?  Why was I gifted with her presence in my mind?  My wife believes that it might have been a little saint from heaven, but I don’t know of a saint who was as young as this little girl appeared to be.

This is not the first time I have had a vision like this one.  Over the past 13 years since being received into the Church, I have seen visions, like this, of a handful of children – mostly static visions.  Their faces persist somewhat in my memory after having the vision.  There is one of whom I think about fairly often – I think of him when I think of my guardian angel; but I do not know for certain that there is a relationship there.  He is “Jeremy” to me.  I think of him as my son, though I and my wife have not had any children except for one child who was miscarried very early and who my wife says she has seen in a vision.